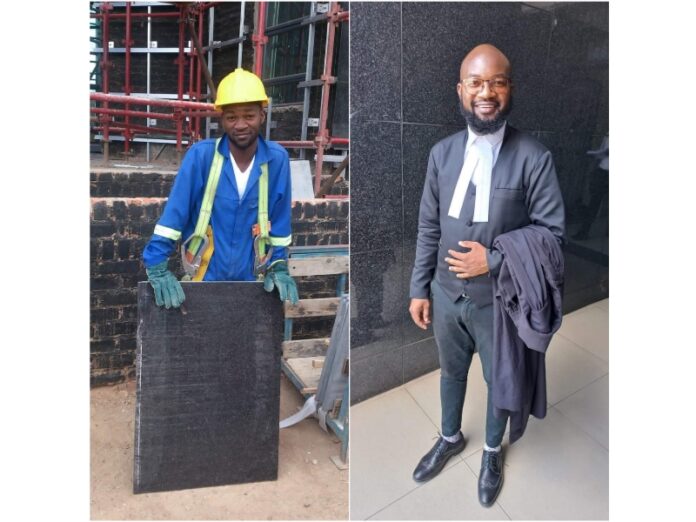 Every time Mpho Lebepe goes to the High Court Towers at the intersection of Bodenstein and Biccard Streets in Polokwane, he is reminded of his not-so-distant past.

Mpho, 29, a promising attorney in Limpopo, wears robes every time he visits the courtrooms there. But on his visits in 2014, he’d be wearing a hardhat and a high visibility vest because he helped to build the very building he now works in.

He used to work as a labourer on the construction site as a granite installer.

“I look at this skyscraper with mixed emotions. I will always be part of the history of this landmark building because I spent a lot of energy [on it] during the construction phase. Now I work here at a totally different level.”

Mpho said he had always wanted to be a lawyer but after enrolling for his law degree in 2011 at the University of Limpopo, financial constraints at home were compounded by the divorce of his parents.

The man from Ga-Mamaila village in the northeastern part of Mopani region was forced to drop out of university to go and work on the high court building that would later become his daily place of employment.

“Life was always a challenge. When people talk about economic meltdown, I know the experience firsthand. I know the pain of dropping out of school and when you return, you are depressed and end up failing some modules.”

After graduating in 2017 Mpho’s life did not change for the better overnight.

He struggled to find a law firm that would assist him in serving his articles.

His year-long job hunting mission was a depressing period as there was no law firm interested in hiring an inexperienced junior lawyer. But eventually he was hired by Bosman Attorneys as an associate attorney.

Mpho said when he decided to establish his own law firm, the struggle continued as there were no clients seeking his legal assistance.

“I remember vividly how I used my Taxify business to market my law firm by distributing business cards to the passengers. Through perseverance my law firm is growing. I have three employees and a bright future is beckoning me.”