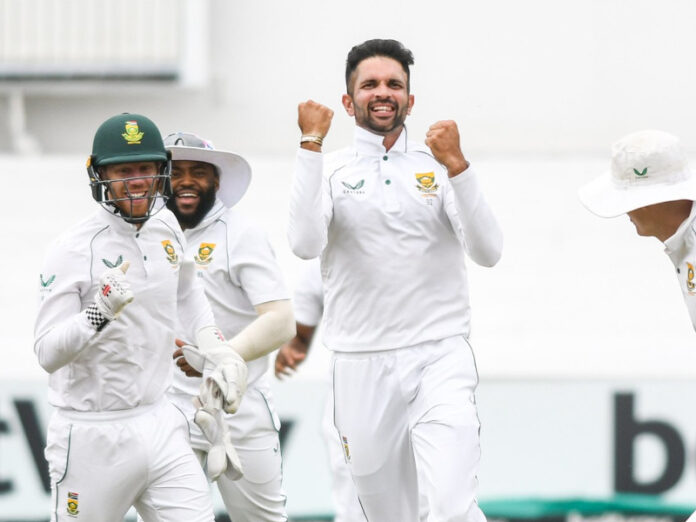 South Africa only needed an hour on day five to wrap up the first test match at Kingsmead as they bowled out Bangladesh for 53 runs to walk away with a 223 run victory.

Dean Elgar stuck with spin again this morning and Simon Harmer and Keshav Maharaj did not disappoint him.

Harmer followed on from his four wickets in the first innings by taking another three to mark a fantastic return to the test arena.

It was Maharaj that was simply sublime on day five, though. The 32-year-old took a seven-wicket haul on his home ground. His parents were watching from the stands as their son claimed the player of the match award.

Maharaj finished with figures of 7/32 in 10 overs.

He said he was glad there was a shift of mindset towards spin bowling in South Africa.

“I’m quite emotional. Playing at home is always special. Glad that I could take the team over the line. The hard work from the first innings paid dividends in the second,” Maharaj said post-match.

Bangladesh’s second innings score was their second lowest test total in their history and the lowest ever test total by any team at Kingsmead.

The BCB, however, have confirmed that they will be lodging an official complaint with the ICC against the umpiring during the test match.

“We have already lodged a complaint about the umpiring after the ODI series. The match referee had initially misbehaved with our manager Nafees Iqbal but then softened when we gave him a written complaint. We will lodge another complaint about this test match,” BCB cricket operations chief Jalal Yunus told ESPNcricinfo.

“Sledging definitely took place from both sides, but when they started it and took it too far we complained to the umpires. It wasn’t acceptable. We totally condemn it. We have to accept the umpires’ decisions but the ICC must reinstate neutral umpires.”

The second and final test of the tour begins in Port Elizabeth on Friday.