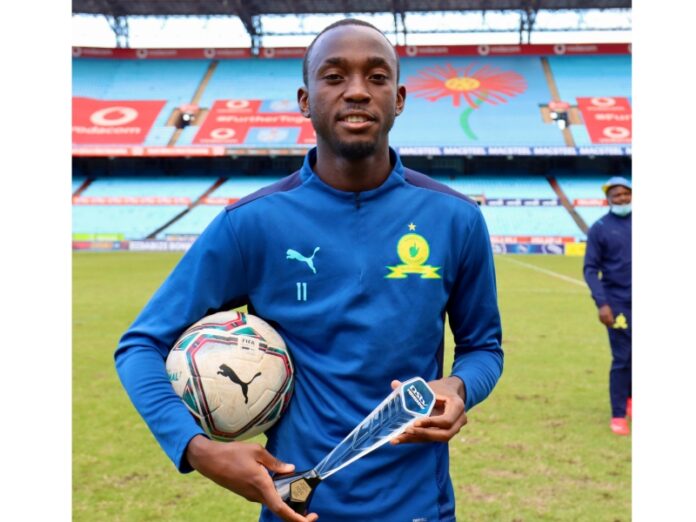 On Tuesday, the Namibian scored a hat-trick when Downs humiliated Golden Arrows by 6-0 in a DStv Premiership match.

It was Shalulile’s 21st league goal this season and he now needs five more goals in the five remaining matches to break the former Kaizer Chiefs marksman’s 17-year-old record.

Nomvethe scored 20 goals in the 2011/12 season when he was playing for Moroka Swallows and that time he was already 34 years old.

Not only did Shalulile break Nomvethe’s record on Tuesday but he also registered his name in the Premier Soccer League’s (PSL) history books by becoming the first player to ever score back-to-back league hat-tricks. He netted a hat-trick last Wednesday against the struggling Swallows.

He still holds the record of being the first PSL player to ever score 14 goals in three consecutive seasons.

His first goals were back in 2020 when he was playing for Highlands Park and last season he did it again at Sundowns and he shared a top goal scoring award with his countryman Gabadinho Mhango.

This is the third time this season that he has surpassed expectations.

After helping Masandawana to win again on Tuesday, the spotlight will be on him in the five remaining league matches. Downs, who are favourites to win the league for the fifth time in a row will host Cape Town City in two weeks time.

Already Sundowns have 57 points and if they could win the remaining league matches they will have 72 points which will see them breaking their own record.

In 2015/16 Downs won the league after collecting 71 points and that was the first and last time securing that number of points since the PSL reduced its clubs from 18 to 16.