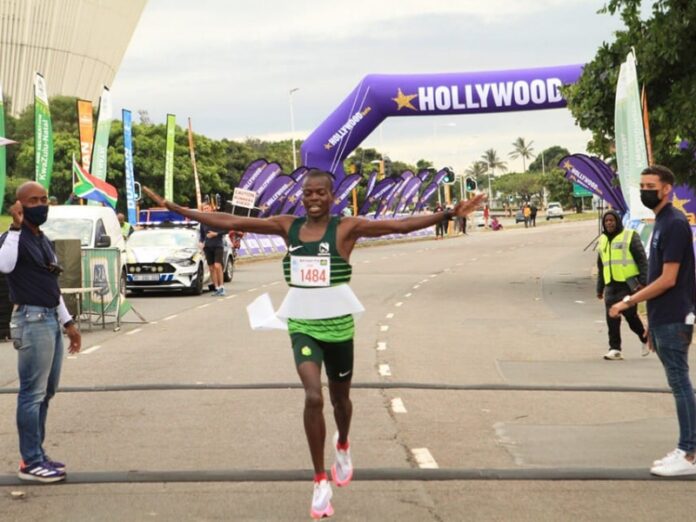 Isaac Mpofu had surely started making plans for his R50,000 winnings after crossing the finish line at the Durban International Marathon held at Moses Mabhida Stadium on Sunday. He finished ahead of the pack, but the Zimbabwean athlete’s joy was short-lived when he was told by race organisers that he had been disqualified.

The reason: He had worn his licence number only on the front of his upper body clothing.

Athletics South Africa rules stipulate that an athlete must wear their licence number on both the front and back.

Mpofu, who was running the marathon under the Nedbank Running Club, showed his peers a clean pair of shoes and did 02:10.24 in the 42km category.

Speaking to Scrolla.Africa before the awards ceremony, Mpofu looked bemused and said he will ask his manager for clarity.

But Julian Joseph from the KZN Athletics technical team insisted Mpofu won’t get his winnings despite his hard work.

“Rules are rules,” he said. “Disheartening this might sound but we have told him and his manager that they didn’t follow the rules. To us it’s like he was running for charity or fun. They have the right to appeal within 24 hours but I doubt they will win the case.”

The number one position was given to Tumelo Motlagale, who had come in second.

Mpofu said he had budgeted to pay off a few debts and pay school fees for his two children with the R50,000.

“For now I’ll stay in Durban with my compatriots and see what I can do before I go back home,” he said.

The race organisers also announced that Busisiwe Chamane, who finished third in the women’s category, was disqualified because she had committed the same error as Mpofu.