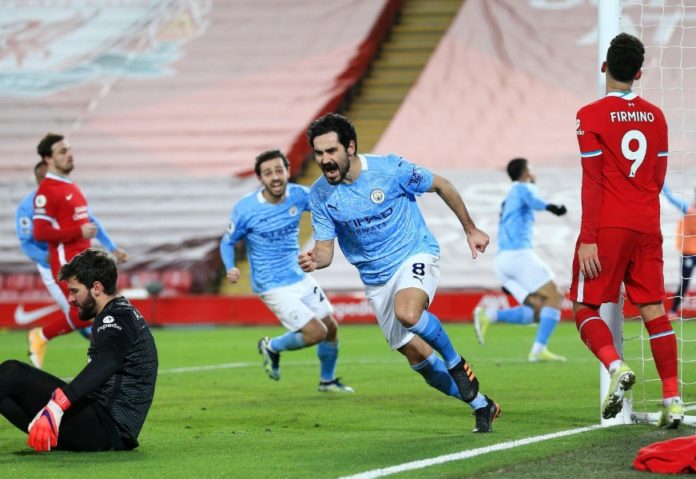 The Citizens beat reigning champions Liverpool 4-1 at Anfield on Sunday to go five points clear on top of the table.

The German Ilkay Gundogan missed a penalty early in the first half that would have given form City the lead. But in the second half he made up for his mistake and eventually put City ahead for just four minutes after the break.

The midfielder scored his second for the Citizens just ten minutes after Mo Salah equalised for Liverpool from a penalty spot in the 63rd minute. Captain of the day Raheem Sterling made it 3-1 for the visitors in 75th minute.

In the 83rd Phil Foden ensured that coach Pep Guadiola got his first ever win at Anfield since joining City in 2016. The defeat left Reds with slim chances of defending their league title that they won last season after 30 years.

This was also Liverpool’s first consecutive league defeat at home in over 50 years. They first lost 1-0 to Brighton seven days ago and now they were humiliated by the 2019 EPL champions.

City are now looking good to reclaim their title glory after this win. They still have a game in hand from their City rivals Manchester United who are second.

Liverpool, who are in fourth place, are now 10 points behind City. Next Citizens game they are at home on Saturday to seventh place Tottenham Hotspur.

Liverpool on the other hand they are away to third place Leicester City on Saturday.