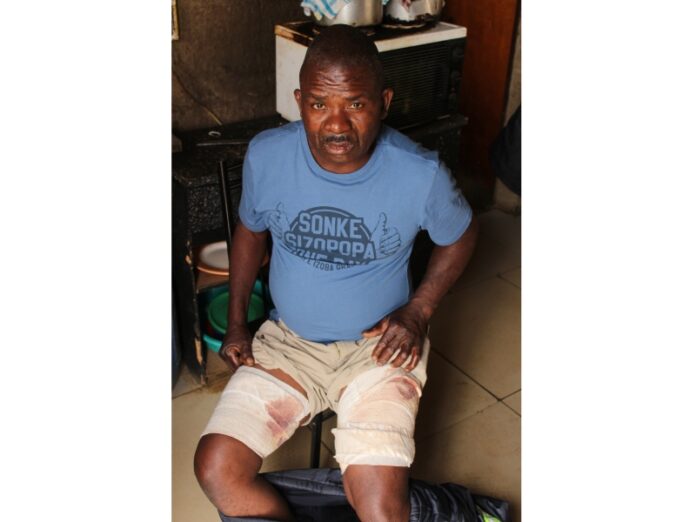 When a group of thugs realised that they had robbed the wrong house and shot the wrong man, they apologised to their accidental victim and rushed him to the hospital.

Robert Nyamusi is lucky to be alive after he was assaulted and shot four times in his thighs during a mistaken identity armed robbery on Saturday night.

Nyamusi was in his house in John Dube in Duduza township with his son when he went to relieve himself in the outside toilet. But as he opened the security door, armed men pounced on him and forced their way inside the house.

“When I asked them what they wanted, one of the men told me they wanted money,” said Nyamusi.

“When I told him we didn’t have any money, he became angry. He told me he wasn’t bluffing and then he shot me.”

The gang then ransacked the house and found R300 in his wallet and R5,000 under his mattress.

“The thugs also took three cellphones and my two beers,” he told Scrolla.Africa.

Nyamusi wondered what he had done to deserve such a violent assault.

And then, as they were leaving, Robert heard one of the robbers telling the trigger-happy leader that they were at the wrong house.

“One of the robbers apologised for their actions. He urged me to get medical attention before I bled to death,” Robert said.

“When I told him I couldn’t walk because I was shot in my thighs, he carried me to the neighbour’s house before fleeing the scene.”

He said he was planning to send the money to his family in Mozambique the following day for his children’s school fees.

“No one has been arrested and police investigations are still underway. We call on anyone with information about the suspect’s identity or their whereabouts to come forward,” he said.