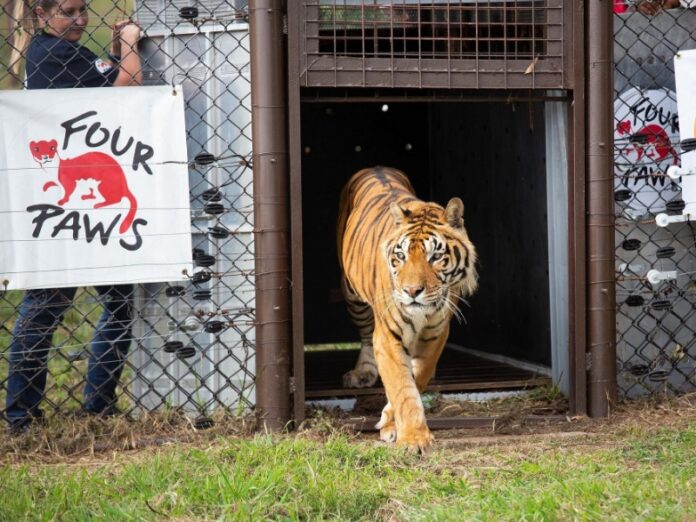 Known as the “Train Tigers”, four Bengal tigers spent 15 years in an Argentine train carriage before they were rescued and released into the wild in South Africa.

After being confined to the same cramped space for 15 years, the animals will now for the rest of their lives be free to roam wild on South African soil.

In 2007, two of the tigers were locked in a space no bigger than two parking spots. They then had two cubs, becoming crammed into an ever tighter space as the cubs grew.

The Four Paws and Lionsrock Big Cat Sanctuary spent years trying to rescue the four tigers, Gustavo, Messi, Mafalda and Sandro, despite knowing that it was always going to be an uphill struggle.

“We worked hard on issuing the permits with the authorities and gave our best to plan out the mission despite logistical obstacles,” the sanctuary said.

The Lionsrock Big Cat Sanctuary is one of 11 wild animal sanctuaries established by Four Paws in South Africa. The sanctuary takes care of over 100 animals that were rescued from zoos, circuses, and from private ownership.

After a long period of planning, the Train Tigers embarked on a 70-hour journey to reach South Africa on 12 March.

“These tigers had never felt grass or earth under their paws. It’s the first time they can see the sky above them, not just metal bars and a roof. Now they have hundreds of square metres full of new feelings, tastes and smells,” said Four Paws veterinarian Dr Amir Khalil, who led the rescue operation.

“It is overwhelming for them to be in a completely new environment, but animals are quick at adapting to better living conditions.”