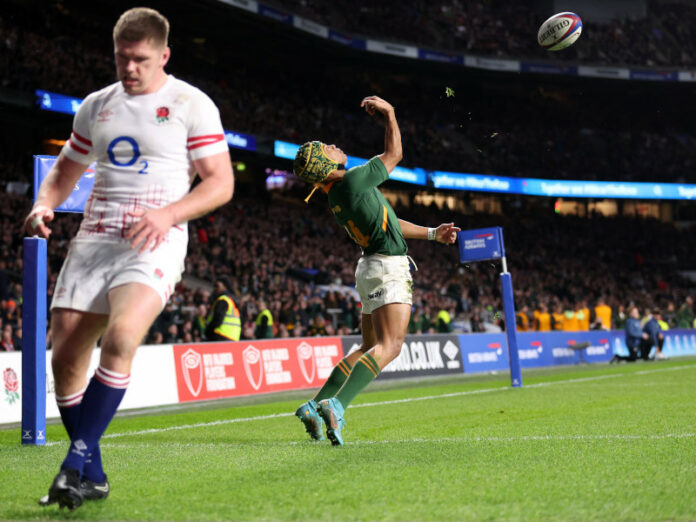 How much influence will about 80,000 English fans singing “Swing Low, Sweet Chariot,” have on the match? We are about to find out.

In the first minute Faf de Klerk fights way above his weight with a try-saving tackle on Billy Vunipola.

The question about who does the kicking for the Springboks is answered when Faf de Klerk takes the penalty but misses. Three valuable points squandered.

England get a penalty, the easy kick is taken by Owen Farrell – who misses but soon a successful scrum penalty by Farrell gives England a three point lead after 13 minutes.

Almost immediately Farrell gets another penalty opportunity that he misses. The light drizzle only partially excuses the bad kicking. Will captain Farrell hand over the kicking duties to Marcus Smith?

Is the momentum swinging? It’s a massive scramble for England to keep the Springboks out. “Listening” to the quiet Twickenham crowd is very soothing to the ear.

Damian Willemse’s drop goal is perhaps worth only three points on the board, but it is, as they say, priceless in terms of confidence for the flyhalf.

So many things make the Springbok try started by Damian Willemse a pleasure to watch, but the way Kurt-Lee Arendse leaves the fleet-footed Marcus Smith totally flat-footed is the highlight of a brilliant Arendse try.

The second half starts with Eddie Jones replacing the England front row. It’s a tough day at the office for the England scrum.

Nobody would have predicted that Damian Willemse would go for a second drop goal but he does – and it works!

South Africa’s defence gets tested early and it is good enough to prevent the try but not the easy penalty. This time Farrell scores the three points.

The try seems inevitable as Eben Etzebeth does the honours.

With 30 minutes to go, every rugby fan around the world remembers how England snatched a draw from New Zealand only a week ago on this very field. But it’s very unlikely that the Springboks will roll over the way the All Blacks did.

With Tom Curry still sitting in the naughty chair, South Africa get a scrum penalty on the halfway line. Strangely the Boks take a shot at goal but fortunately Faf de Klerk slots it. South Africa lead by 24 points.

Then the back door opens for England. Thomas du Toit picks up a red card for a shoulder charge.

For a precious six minutes the Boks defend furiously on their try line but sparkling play leads to an excellent try by England’s Henry Slade.

Eight minutes to go, England trail by 14. Faf de Klerk gets stretchered off with a damaged ankle.

Somehow England manage to attack themselves right back to in front of their own try line facing a South African scrum.

Four minutes to go. England are stuck five metres from their own try line.

Zero minutes to go. The Springboks win by 14 points.

The drone of the silent crowd is deafening.