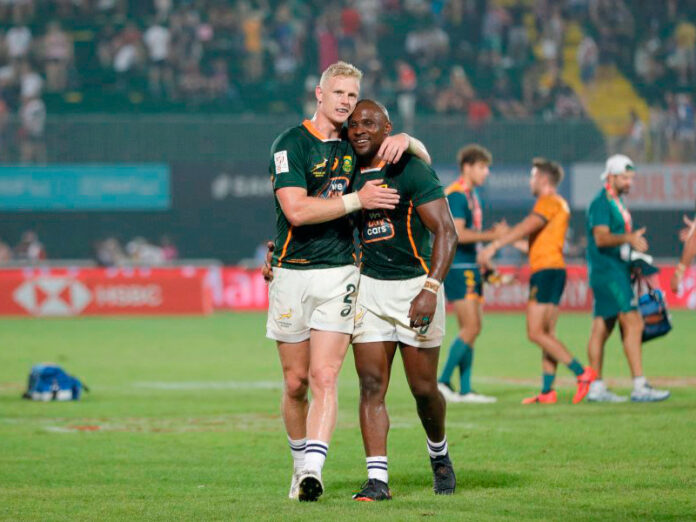 Before the final even starts, the Blitzboks under the leadership of coach Sandile Ngcobo have already indicated a new way of play – less flamboyant, more committed and a joy to watch.

Not only are they in the final of the HSBC Dubai Sevens, they have taken the tournament by the scruff of the neck. Whilst playing attractive, exciting rugby is all good and well, but they are here to win.

In their route to the final, they have already beaten Samoa and New Zealand, and now they are in the gold medal hunt with Ireland left to beat.

Certainly, it would be great if South Africa won the gold, but given the struggle out in the wilderness (as indicated by their 8th position in the points standing), silver would not be a bad consolation prize.

New Zealand snatch the bronze medal with a convincing 31-12 (four tries to two) victory over America as South Africa and Ireland step onto the pitch.

In the first seven minutes it’s all Blitzboks as Shilton van Wyk scores two converted tries without reply. But then Ireland get possession and look like scoring until Siviwe Soyizwapi intercepts. The teams change sides with the Blitzboks leading 21-0.

How can seven minutes take so long?

The Blitzboks are on defence for most of the half with Ireland scoring with four minutes to go. Will it matter that the conversion fails? But, no. In the end it doesn’t matter.

It’s gold for the Blitzboks. It’s a new coach, a new style of play, and a new era.

Pictured above: The Blitzboks