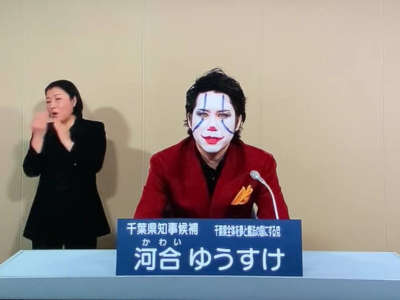 A Japanese man running for office has set the internet ablaze because he campaigns whilst dressing as the Joker, Batman’s archnemesis. The results are predictably ridiculous, and a little cringe-worthy.

Yusuke Kawai, who is in the race to become Chiba Prefecture governor, uploaded a video announcing his candidacy on Youtube alongside a rap song, titled “It’s Show Time” (don’t look it up, it’s terrible).

The 40-year-old man currently occupies the not-so-villainous role of heading an event planning and temporary employment agency in Chiba.

Unlike his day job, however, the party to which he belongs does have an outlandish name: “the Party to Make All of Chiba a Land of Dreams and Magic.” Sounds less villainous than idiotic to us.

Kawai’s 2019 halloween costume of white face paint, slicked back hair and a maroon suit resembles Joaquin Phoenix’s infamous rendition of the character in the film, Joker.

However, hilariously, he can’t actually call himself “The Joker” for copyright reasons, so he has to refer to himself in a much more appropriate way, as “a joker,” according to Sora News 24.

Explaining the reason behind his make-up, he told Tokyo Sports, “Since the clown is kind of a dark hero, I had this impression that I could get the support of the masses.”

Influenced by films (but apparently not by a sense of originality), he has outlined some of his plans for the small town, which includes renaming Narita Airport as Disney Sky, and making ‘Let It Go’ from Disney’s Frozen Chiba’s theme song, Kotaku reported.

“Why so serious?” So the unhinged villain’s catchphrase goes. Well, in that vein, we ask Mr. Kawai, “Why so stupid?”