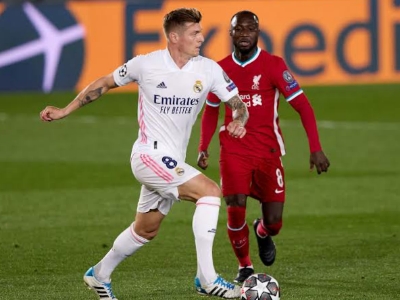 While Liverpool have a tough job on their hands fighting their way back into the UEFA Champions League quarter-finals, there may be a chance for them to sneak in through the backdoor.

They play the match against Real Madrid at Anfield on Wednesday at 9pm.

Zinedine Zidane’s Real Madrid lead the tie 3-1 thanks to an impressive victory in the first leg, but Los Blancos have problems at the back with Lucas Vazquez their latest injury casualty.

Vazquez left the field with an injury during Real’s 2-1 win over rivals Barcelona on Saturday.

In addition, centre-back Sergio Ramos is still nursing a calf injury and Raphael Varane is still sidelined after testing positive for coronavirus, while defender Dani Carvajal is out with a hamstring problem.

Speaking after beating Barcelona, Zidane said: “I don’t know how we are going to end the season. We are hanging in there but we are struggling to finish games.”

Liverpool need to win by two clear goals – something that could be difficult against an in-form Madrid, who have only lost three times in their last 26 matches.

In the other quarter-final tie on Wednesday, Borussia Dortmund host Manchester City at Signal Iduna Park in Germany at 9pm. City hold a 2-1 lead.